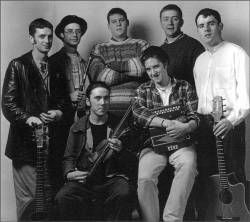 Danú was founded between Daire Bracken, Dónal Clancy, Donnchadh Gough and myself in 1995 and has been very successful over the past 25 years. The group has toured extensively all over the USA, Canada, Europe and Scandinavia in this time. Danú is very honoured to have recieved numerous awards over the years including two BBC Folk awards (2001 & 2004) Like alot of bands we have seen some line up changes over the life of the band but todate still features some of the finest talents in Ireland contributing to the sound and evolution. Danú was signed to Shanachie Records for some albums and todate has produced ten album releases and a live DVD.

Touring with the band nowadays is mostly in the USA with some select Irish and European weekend performances where possible. I still manage and perform with Danú and enjoy recording and touring very much with all these great performers.